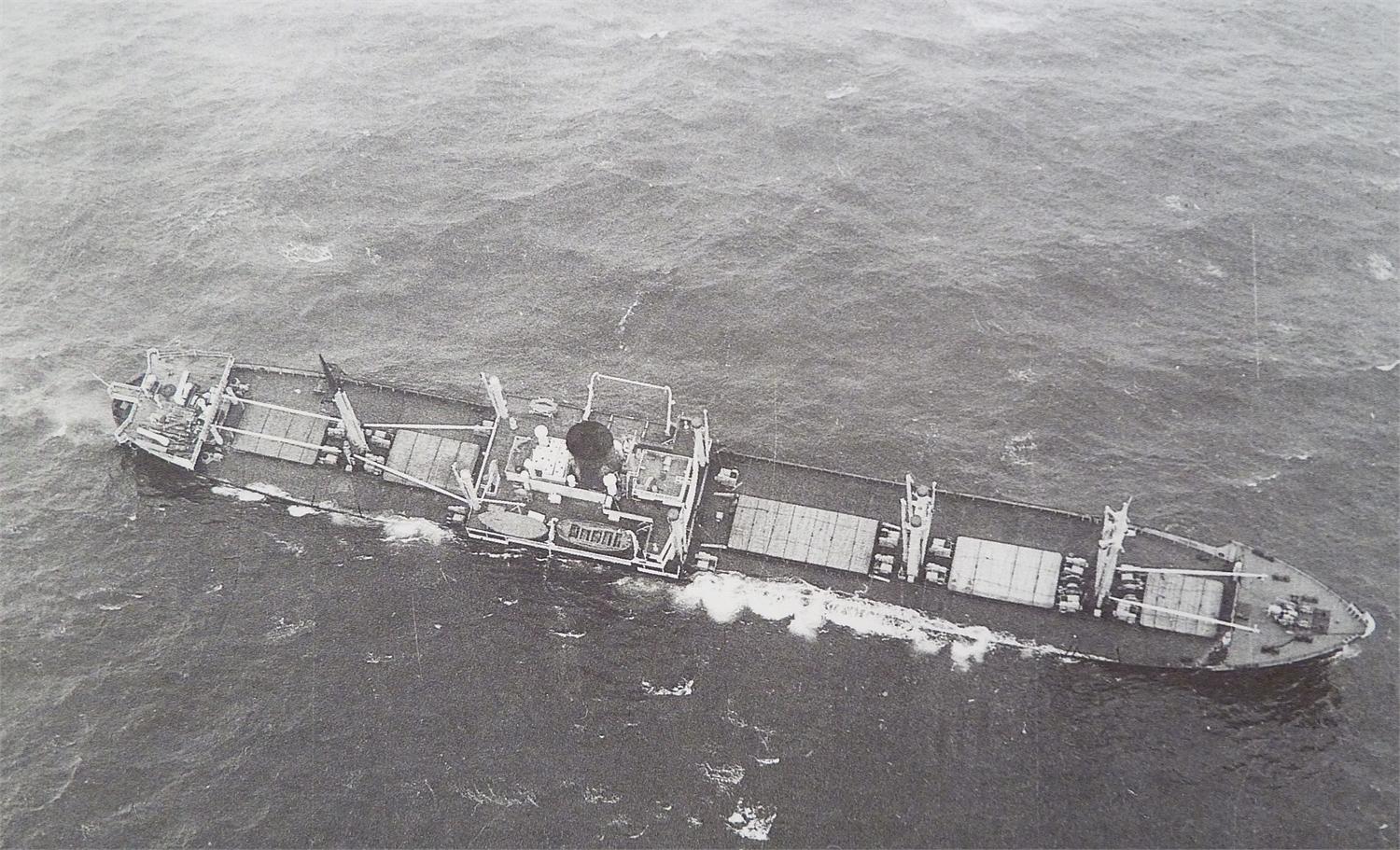 There’s one local wreck dive, that the mere mention of can have the local rusty diver turning their nose up in scorn or perhaps even full-blown disgust. The Captain Niko…

Built in 1948 she sank in 1973 off the West coast of Guernsey. En-route from Rotterdam to Alexandria with a cargo of Ammonium sulphate fertilizer. Full story here

In the early days she was heavily dived and those that visited talk about a pristine white wreck – a lovely dive apparently that you could practically see the wreck from the surface.

These days though, you’ll struggle to get anyone to dive her, normally the reaction you get is along the lines of, “The Niko? It’s shit”

For me though, I like it. There are a few bits of the wreck that make Havelet bay seem exciting, but then it is a very big wreck. It was a big ship to start with, and now that it’s broken up a bit and spread out it makes for a huge site. As it’s mostly 50m ish, you couldn’t swim from one end t’ other in 1 dive, well at least I don’t think I can.

The offending part is a huge bit of hull that sits at around 30 meters, it’s just a perfectly flat area around 30m long. If you try and dive this bit or if you end up on top of it during the dive, it’s pretty much game over for that dive as there is no point in trying to find a better bit to dive within the allowable time.

In the past couple of years, we have managed to mark a few of points of interest. One is the bow, which is broken away but intact and upright (ish). As it still has all it’s winch gear etc attached it’s pretty much a dive in itself. The second is a part (i think) just behind the main wheelhouse that I dived with a BSAC club that came over in 2016, as i was only there as “shot-bitch” and to skipper their RIB, i didn’t have much time on the wreck. There seemed to be lots to explore there, including a big doorway which beckons for a more thorough mooch. Lastly, there is the wheelhouse itself. I’ve only seen it once, and not for long as it was at the extreme of my range from the shot-line, again there appeared to be plenty of places to get stuck in to the rust.

While i’ll admit that the wreck must have lost some of it’s sparkle in the 44 years on the seabed i think there is life in the old girl yet.

The thing is though, she can be a cranky bitch. Often when i’m describing local wreck diving to new divers, i’ll say that the Cement Wreck (30m) is a nice friendly wreck and that the Ammo (30m) is a more advanced “foreboding” wreck. This is probably down to a few different things, the bottom type and it’s ability to reflect light, the amount of slack tide and the general area of the wreck (the AW is right outside the harbour and can be stressful with the amount of close traffic). The Niko somehow manages to be both. One day she’ll be a lovely welcoming wreck, and another day without any real reason you get the impression that she doesn’t want to be disturbed. Infact, on a couple of the times i’ve dived her, i really felt that she was doing her best to keep me there for eternity!

The main trigger for this blog, was a dive that i did a couple weeks ago. As I said above, i’m still trying to build the mental picture and marks on the plotter for the wreck. As it was just me, I decided that it would be a good idea to “free-dive” the wreck with no shot-line, just a delayed SMB to enable me to drop on the stern and see where i could get to. I dropped down quickly to not miss the wreck entirely, landing on a part I think was just up from the stern. Happily the vis although not amazing was pretty good at maybe 6/8m. So there I was, merrily drifting along the Southern side of the wreck for around 8 minutes, there was very little tide so i was swimming in an effort to cover as much ground as possible in the short dive that I had (sort of) planned. Much of this “plan” revolved around the fact that i’d left my 02 at the bunker and therefore had no inclination for a long back-gas decompression in the 11 Celsius water. Brrrr…

So there I was, happily swimming along the wreck, vis was good and everything else was going well. In front of me was some lost crab-pot rope, floating off the wreck a few meters in a tangle. Now the last thing you want on a 50m dive is to get tangled in this heavy 14mm line, so as soon as i saw it, i made a sharp turn away from it. At that point, there was a big “gust” of tide and whoosh… No more wreck!

The wreck had just damn vanished!  The vis was OK, the tide was back to a wee crawl, and it is a big lump to find especially with my fairly good sense of direction underwater. But no, no wreck in sight. Weird. Very Weird.

I swam around for another couple of minutes trying to find it again, and just couldn’t. The other weird thing, I was diving it on the Southern side, after the high-water. This means that the tide would have been flowing NE, and then gone N-NW-W-SW as it turned to ebb (as far as i understand the area), therefore, any tide would have pushed me on to the wreck, not away from it!

I have a theory as to why a lot of divers say that they hate the wreck, I think it’s because they’ve had a dodgy moment on the wreck like I have and decided not to go back. One part of the problem is that the Niko is often touted as a wreck that you CAN dive on any size of tide, while the others are only doable on the neap tides. I think that this means people try and dive it on the bigger tides, which causes the issues. I’m going to try and get there as a priority this year to get a better understanding. The only problem with that plan, is that the St Malo is not much further out, and I like the St Malo very much…

In conclusion, give the poor girl a spin, she’s not that old and you may even like it. Just be sure to have your wits about you and don’t try to dive the bit that looks the shallowest on the sounder.