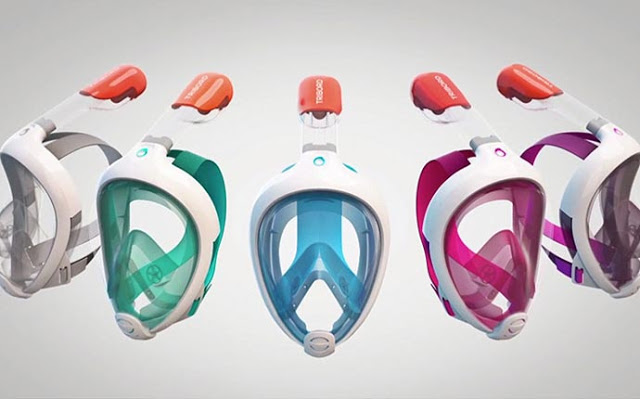 With popularity growing amongst users in the warmer oceans of the world, we’ve been hearing quite a lot about full-face snorkel masks (ffsm) this year.  Perhaps strangely, it’s the watersports retailers, rather than the dive shops selling these things. One of the largest diving manufacturers only makes them branded for their sports line, rather than their diving brand. Is it some big conspiracy, or something else.

Someone will come into the bunker and ask if we have them, we will answer that we haven’t and go on to explain what we don’t like about them based on our experience. They then say that they’ve used one on holiday and that it was amazing. We agree to disagree and away they go, presumably to purchase one online.

A few days later, they come back in to ask about anti-fog. We say that there is a compound we use on a standard mask, but that we don’t think it works on the ffsm type from what we have seen / heard / experienced. They buy the anti-fog and away they go again.

A few days later, they return, admit that the ffsm is a heap of junk and buy a normal mask and snorkel. This has happened many times this year…

So, here is what we think…

With a standard mask, there are many, many variations in size and shape, with a ffsn, there only seems to be a couple – S,M, L – which isn’t enough. This makes good fit an issue, unless you have a perfect face for the ffsn.

A standard snorkel is just a tube with a mouthpiece, it is designed to allow water to flow in AND out very easily, meaning that with an easy technique, any water entering the snorkel can be easily blown out. Even if the diver fails to do this, it can be very quickly spat-out allowing the diver to breathe again as nature intended. This cannot be done so easily with a ffsm.

To allow the ffsn to have the best chance of fitting, it needs to have a substantial strap that covers most of the back of the head. This strap needs to be pulled tight, to keep the heavy (out the water) and bouyant (in the water) ffsm in place. This means that if you do get water in it, or need to remove it quickly for another reason, it is difficult and could easily (in my experience as a diving instructor) lead to a panic situation. Not good in the middle of the sea.

I mentioned above about the fogging. This is caused by warm moist exhaled breath condensing due to temperature change on the lens, as a ffsm has a lens made from plastic, it will tend to fog more than a standard mask because it (unless it’s cheap rubbish) will use tempered glass. The other big factor is that a normal mask is only connected with exhaled breath when the diver breathes out through their nose, which should only be done for a specific task such as equalization or water clearance rather than each breath. This leads on to one of the biggest problems in snorkeling…

Snorkeling is very easy, and for the most part people pick it up very quickly without any real training. Historically, i believe that most people would have only tried snorkeling locally if they had an interest in other aspects of the sport or experience in the sea. Or maybe they were introduced by an experienced mate who showed them the ropes. Now though (and this is a good thing) snorkeling is readily available to more people and some of these may not be very comfortable in the water. If you are not comfortable in the water to start with, then you shouldn’t be having a go without proper instruction. Whether this is from an experienced mate or proper instructor makes no difference really, but you need to make sure that you know what to do and how to do it.

Anyone wanting to know more about the basics, can take a free online or app based course with SSI through us by clicking here.

The bad points of the ffsm don’t end there, there are also technical / physiological issues.

Breathing is the act of air being pulled into and pushed out of your lungs. On it’s journey, it needs to pass through your mouth and windpipe down into the capillary laden  air sacs in your lung tissue. These are where the gas exchange of oxygen (in) and carbon dioxide (out) takes place. Any area other than these air sacs is termed “dead air space” and has no respiratory benefit – other than filtration etc, but for the purpose of this that’s a bit too “deep”

Dead air spaces are important in diving, because we are adding to them with any breathing apparatus that we use. This means that a larger proportion of our breath is doing nothing in the way of bringing in oxygen or expelling carbon dioxide. There is no 2 ways about it, the ffsn makes this worse!

The problem with lack of oxygen and too much carbon dioxide, is that you can initially feel out of breath, often this leads to a more rapid but shallow breathing pattern, which in turn adds to the original problem. If left unchecked, it can lead to unconsciousness, and in water that normally means drowning. With a normal mask and snorkel, you can just spit the snorkel out and easily push the mask off your face, this is not so easy with a super-tight ffsm.

I’m not saying that these incidents are very common, with a little research i’ve found a death or 2 which cites a ffsm as a factor, but who knows the actual truth of the matter.

From usage point of view, the ffsm also fails. You’ll struggle to dive below the surface, which is the general progression as a snorkeler. Firstly, you’ll struggle to equalize your ears, which for most people means a maximum depth of 1.5 meters, unless you want to hurt your ears. Secondly, even if you can equalize your ears, there is the problem of volume of air in the ffsm itself. This needs to be equalized as you descend with air from your lungs. In a standard mask, this only equates to a few ml, but in a ffsm it’s a lot more.

So to sum up, the ffsm is: Uncomfortable, heavy, leaks, fogs, stops the diver from progressing and may even be downright dangerous.

The best way i believe, is to get a good quality standard mask and snorkel that fits and learn to use it properly. You’ll enjoy it far more in the long run, and you never know it might lead you into more advanced snorkeling / freediving or even SCUBA diving being a big passion in your life.

If anyone wants to learn more about this snorkeling (or diving), you can send us a message, or pop into the bunker for a chat. You can also sign up for the totally free, no strings attached online courses here – you’ll just need to register “Dive Guernsey” as your affiliated center, don’t worry we wont spam you!