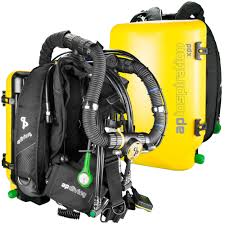 Now that there are a couple of new rebreather divers in Guernsey, it’s more than likely that you’ll hear some rebreather-speak this coming year. So I thought that i’d write a post about what they are, and what my first impressions are of being a buddy to someone diving with one.

Firstly, my only experience diving with one is a try-dive a few years ago with Mark Ellyatt in the south of England, whilst over there doing some SDI / TDI Instructor training. This consisted of a 10 min chat and then jumping into the shallows of a bay to swim about for an hour.

For those that don’t know, what we refer to as a “rebreather” is more accurately called a “Closed Circuit Rebreather”  or CCR for short. All CCR’s will have 6 common components, an Oxygen (02) cylinder, Diluent cylinder, scrubber, a head with various electronic monitoring systems, some counter lungs and a breathing loop.

The 02 cylinder is just that, a cylinder filled with oxygen.

The Diluent cylinder is filled with a gas compatible with the maximum depth of the dive. This would typically be air (21%) down to about 40m and trimix for depths beyond that.

The scrubber is essentially a canister filled with soda-lime, a chemical that reacts with C02, changing it chemically and effectively trapping it within the soda-lime itself.

The head comes in many different configurations, but all will contain a number of 02 cells like you get in a nitrox analyser. These cells will then be read by a CPU and the information displayed on a screen for the diver to see. Many units also have a built in controller that runs the unit based on that information.

The breathing loop is a set of hoses that run from the scrubber, to the mouthpiece via the counterlungs.

So, how does it work…

The diver breathes in, taking in gas from the 02 rich inhale counterlung, 02 is transferred in the divers’ lungs to the blood stream. In turn the body gives out C02 and water vapour. This low 02 / high C02 mix is then exhaled into the  exhale counterlung, prevented from going anywhere else by 1-way valves in the breathing loop. On the next breath, this gas with then be pushed into the scrubber. As it passes through the scrubber the C02, water vapour and soda-lime cause a chemical reaction which traps the C02. The gas that reaches the top of the scrubber will then hopefully be low 02 and no C02.

This low 02 gas will then pass over the 02 analyser cells, this information will be sent to the diver and controller. The diver or controller will then make a decision as to whether the 02 level is sufficient. If it’s not then either the controller will open a solenoid valve or the diver will press a button to allow more 02 in to the system to bring it back up to the correct level. The gas then continues it’s path back into the inhale counterlung and on to the divers’ lungs again.

Where does the Diluent come in?

As the diver descends 2 things occur. The volume of the gas in the system will decrease as the water pressure (depth) increases, meaning that there wouldn’t be enough to breathe. Secondly, the pressure (quantity) of 02 will increase. If 02 was added to the loop to make up for the lost volume, the pressure of 02 would quickly reach dangerous levels. So to stop this happening, a low 02 mix must be added to make up the volume. In the case of gas loss from the loop, adding diluent may drop the 02 pressure, in which case the diver or controller will add more 02 to maintain the mix to the required level.

As the diver ascends, the opposite happens. The volume in the loop increases and the pressure of 02 drops. To counteract this, the diver has to “lose” some gas from the loop via a valve, or exhale through their nose so that the gas escapes. The diver or controller will simultaneously be adding 02 to maintain the mix to the required level.

As a buddy, you need to have a fair understanding of all this stuff in case you need to help a CCR diver. You also need to make sure that you keep a close eye on them both figuratively and literally. Because with no bubbles there is less to see, especially on descent / ascent, and no noise either.

As a non CCR diver, you’ll likely always be the person to end the dive as the CCR has several hours of endurance per fill. Also, due to the constant pressure (quantity) of 02 provided, they’ll have a longer NDL or less decompression than you will on normal scuba gear.

You may be reading this and think “What’s the downside” well, there are a few.

Firstly, you have the expense of the unit originally, plus high service and maintenance costs. This can be offset somewhat if you are saving on Helium costs by doing lots of deep diving, but it does have to be a lot of diving!

Secondly, the CCR diver has to pay attention, like ALL the time. It’s not something you can check every now and again. If you don’t check it enough, it’s very likely that it’s going to ruin your day! This also applies to pre-dive checks, post-dive maintenance and everything else to do with the CCR, if you scrimp on either time, focus or cash it’s not going to end well.

For me, this actually detracted from the enjoyment of diving somewhat, having to pay so much attention to the CCR and less to the fishes.

3 Replies to “Rebreathers, first impressions from a buddy…”